Which are the happiest countries? Visualising the top 10 countries on the Happy Planet Index

For my 100th data visualisation on Tableau Public, I decided to explore data about the happiest countries in the World via the Happy Planet Index (HPI).  The HPI measures what matters: sustainable wellbeing for all. It tells us how well nations are doing at achieving long, happy, sustainable lives. I wanted to improve upon a data visualisation published as an interactive map on the HPI website by making it over in Tableau Desktop.  I also wanted to learn about and test a relatively new functionality available in Tableau called ‘Set Actions’, which can let your audience drive the analysis of the visualisation interactively through defining what is in or out of a set of data.

What works wells with the original visualisation 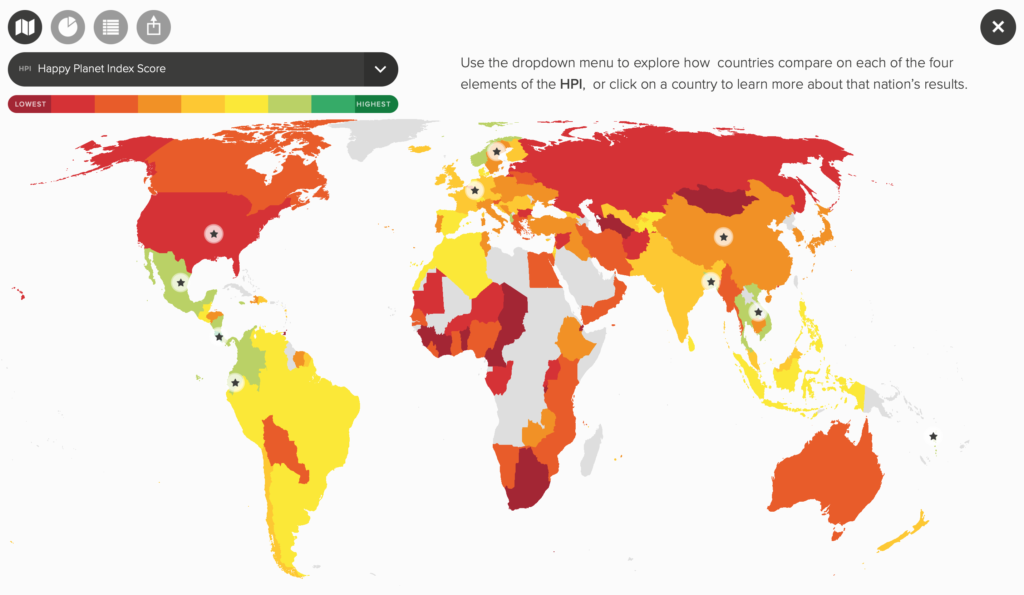 Maps are instantly engaging to an audience. 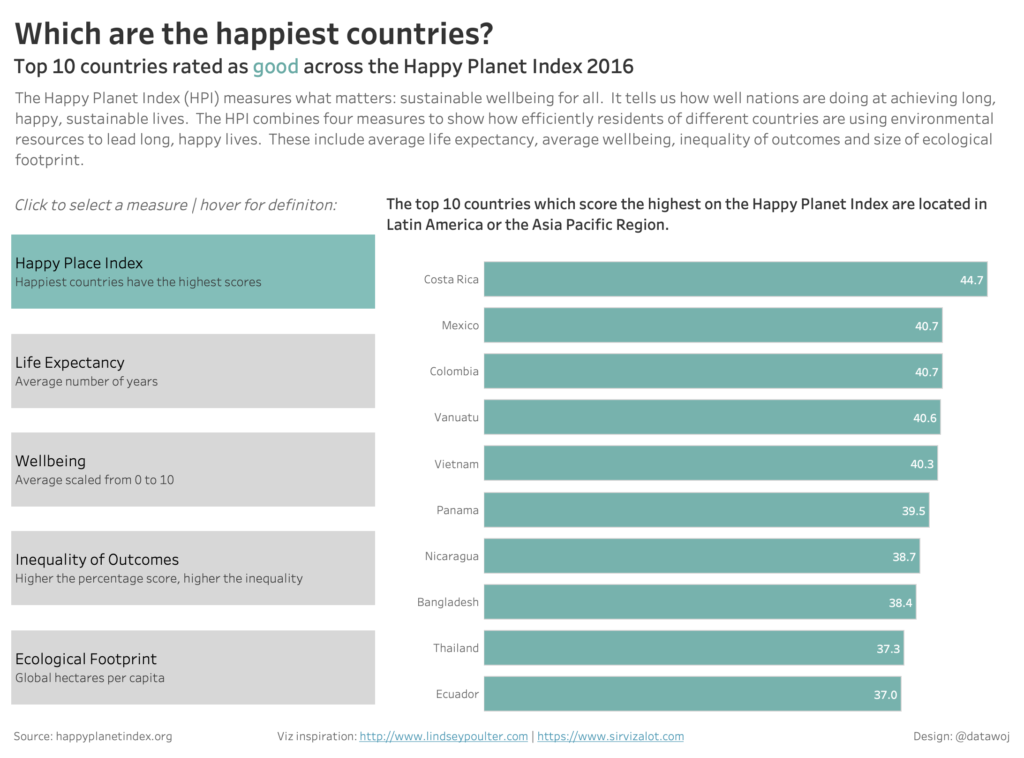 How does it work?

I first tried using a ‘select a measure’ approach adapted from this article by Lindsey Poulter, who has published lots of resources on set actions.  In this approach, a metric selection calculation uses a dimension such as ‘region’ and a CASE statement to select the measure.  If for example, the Americas region is selected to be in the set, the Happy Planet Index is the measure defined.

The interactive buttons are actually regions re-labelled to each related measure.  By changing the region in/out of the set via a set action, the metrics can be updated. 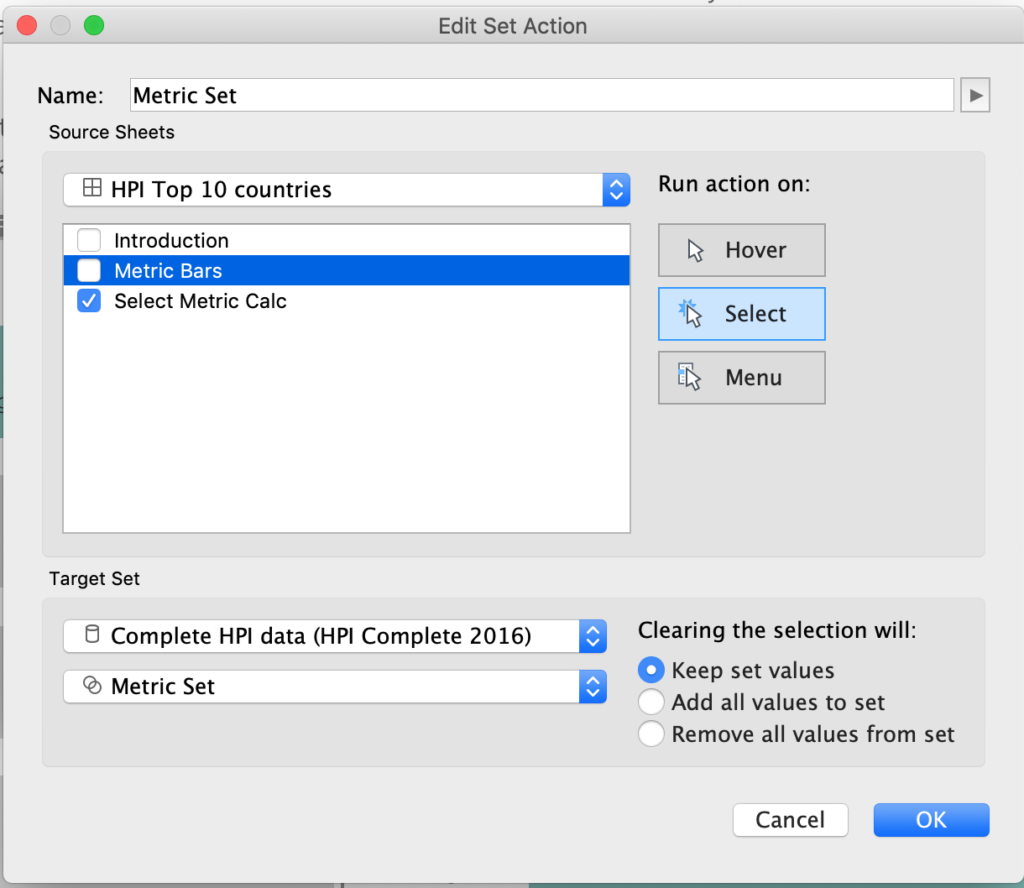 This calculation can then be used to create an interactive bar chart. 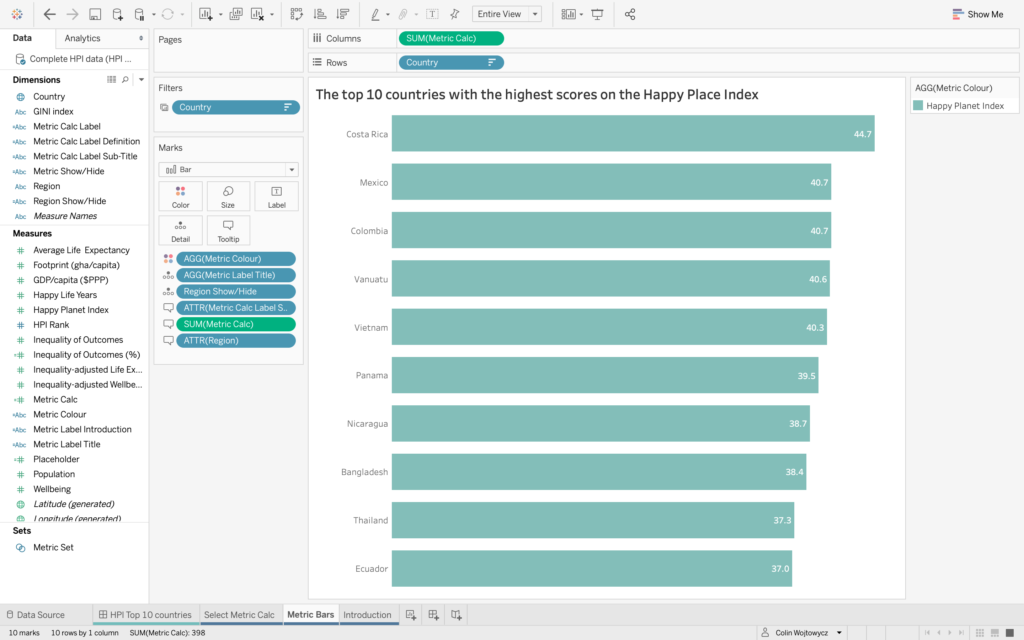 The second approach is ‘sheet swapping’ using an adapted version of Lindsey’s approach in this article by Matt Chambers.  In this approach a chart is created for each measure and a ‘sheet swapper calculation’ is created.

Again, when the user clicks on the measure selection menu the set action updates which regions are in or out of the set and the chart is updated. 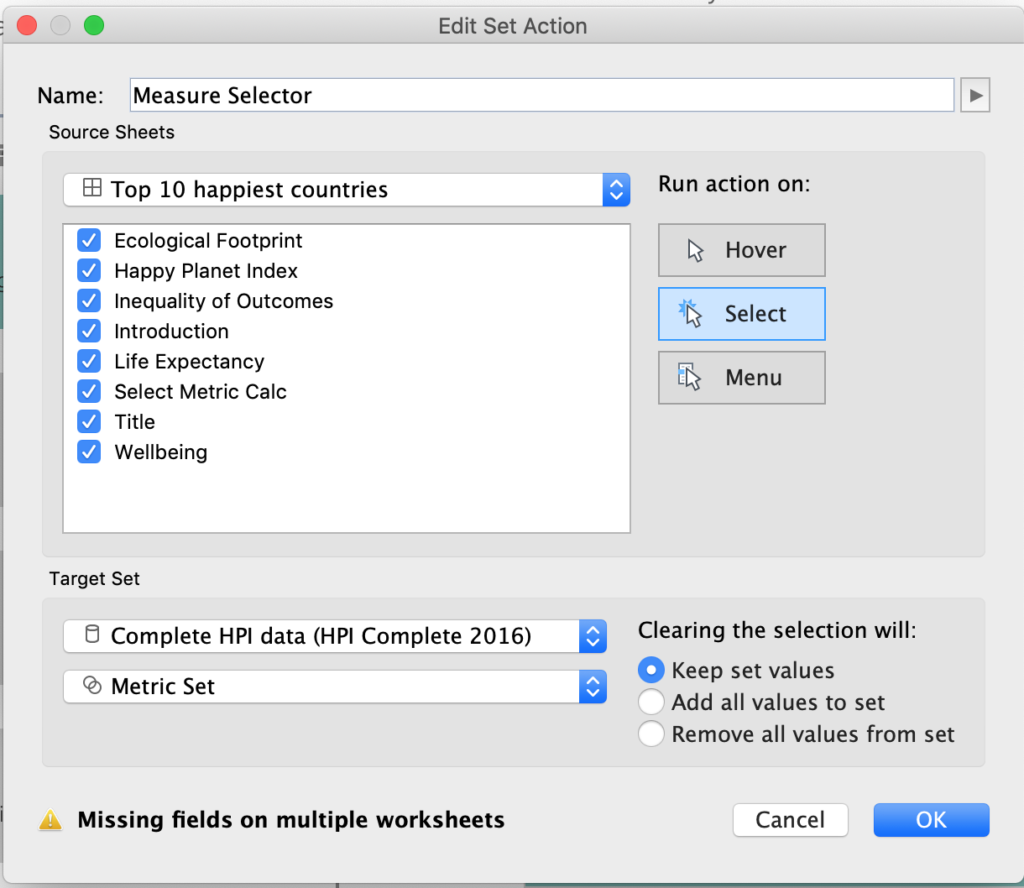 The set sheet swapper is used as a filter to swap the appropriate chart in and out of the visualisation. 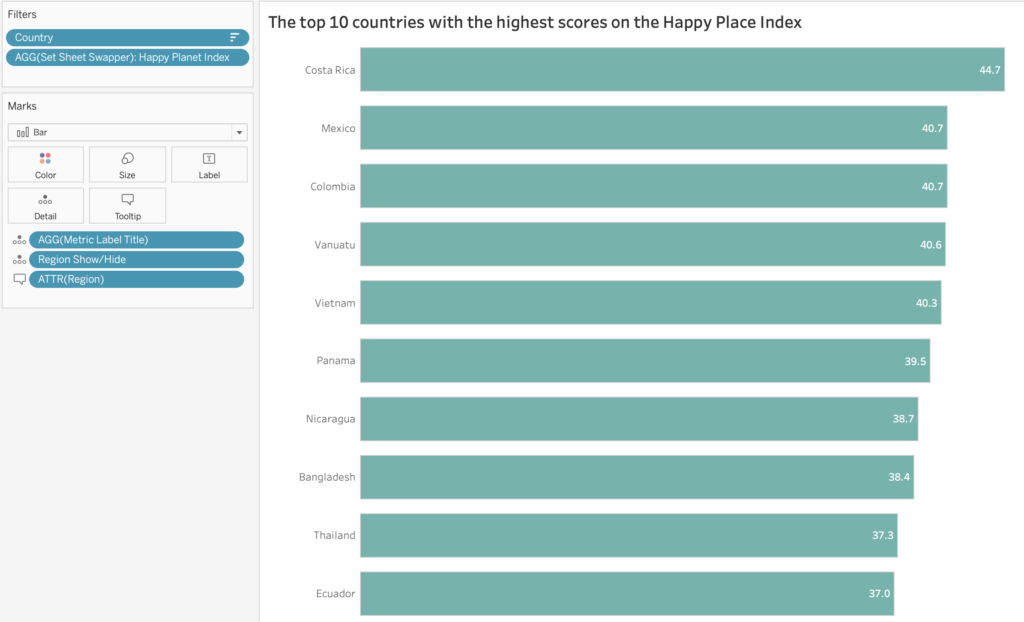 I found the select measure approach was easier to build as only one chart is involved.  However due to the nature of the dataset, some measures required inverting from the ‘top 10’ (e.g. HPI scores) to ‘bottom 10’ (e.g. ecological footprint) countries in order to display the happiest countries.  Sheet swapping means building more charts but allows for more customisation across the measures.  In the end I went for the sheet swapping option.

What did I learn?

I learnt a new methodology in set actions. The Tableau community resources are a good source of knowledge to build upon.  Set actions are versatile: the metric calculation can be used to change the chart, title and colour of the measure selector!  I learnt that there are more than one way to build an interactive visualisation in Tableau.  It is worth spending some time trying a couple of approaches to see which one works best in the context of the visualisation you are building.

The subject matter was really interesting! It made me think about how we measure happiness in a place.  Quite often we define a developed country as those with the largest economies, whereas actually we need to consider whether that economic growth is contributing towards a happy society.  One which promotes longer life expectancy, wellbeing and equal opportunities without costing the Earth.