Using colour to tell a better story with data

The topic of Week 12 was something I had never heard of before called ‘March Madness’.  This turned out to be a single elimination tournament played each Spring in the USA, whereby 68 college basket ball teams from Division 1 of the National Collegiate Athletic Association battle it out to reach the National Championship also known as the ‘Final Four’. 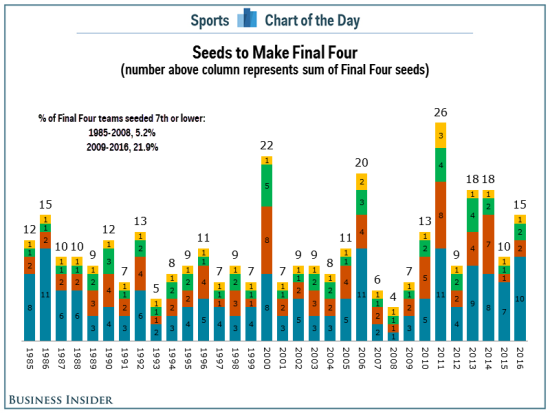 How did I approach my makeover? 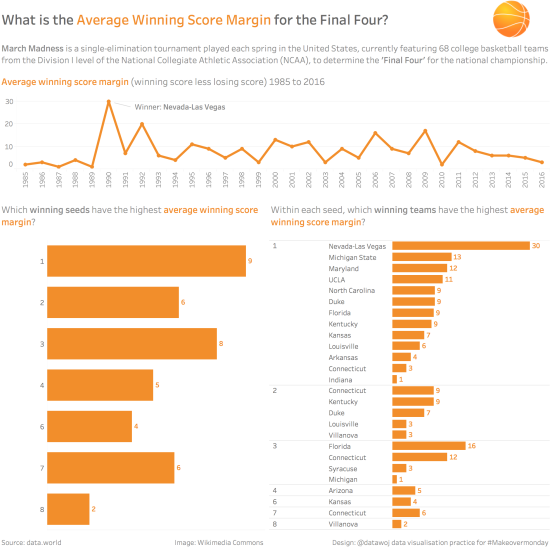 However I quickly realised that whilst it does show which seed or which teams had won by the largest average margin nothing really stood out because there was so much orange! There was no contrast of colour.

I have been reading the fantastic book ‘Story Telling with Data’ by Cole Nussbaumer Knaflic who states that “When used sparingly, colour is one of the most powerful tools you have for drawing your audience’s attention” (Nussbaumer Knaflic, 2015, p117).

This is because intensity of colour, along with position and form are what are known as ‘pre-attentive attributes’, that the human memory has evolved to process very quickly in order to notice differences.  Pre-attentive attributes can, as Nussbaumer Knaflic (2015, p104) states be used to “enable our audience to see what we want them to see before they even know we’re seeing it!”  The key learning point there about colour is ‘when used sparingly’.

In his iconic book ‘Show Me the Numbers’, Stephen Few (2012, p79) discusses the use of contrast to draw attention to those elements we wish to stand out.  However, as the number of things contrasting increases Few argues so the degree to which differences stand out decreases.  The message becomes buried in visual clutter as “when everyone in the room shouts, no one is heard” (Few S. 2012, p79).  This meant the audience has to use more cognitive brain power to interpret the finding. 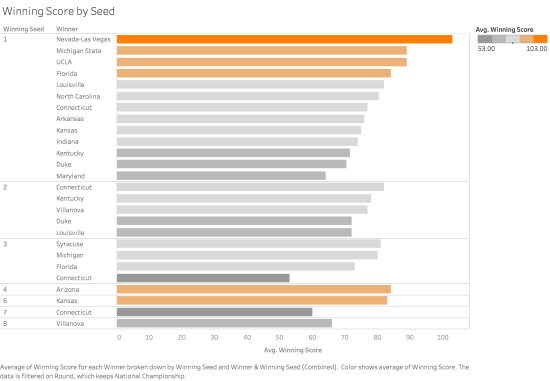 In his very useful 2016 book; ‘Data Visualisation’, Andy Kirk addresses the need for an ‘angle’, a ‘frame’ and a ‘focus’ as part of editorial thinking.  The angle is the interesting insights you want to communicate to your audience, the frame includes the specific details you wish to include or exclude whereas the focus is the features you wish to draw attention to.  I had my angle (average winning score margins for the Final Four), I had my frame (average winning score margins over time, seeds and teams) but I had failed to really focus on a particular story point.

What did I change? 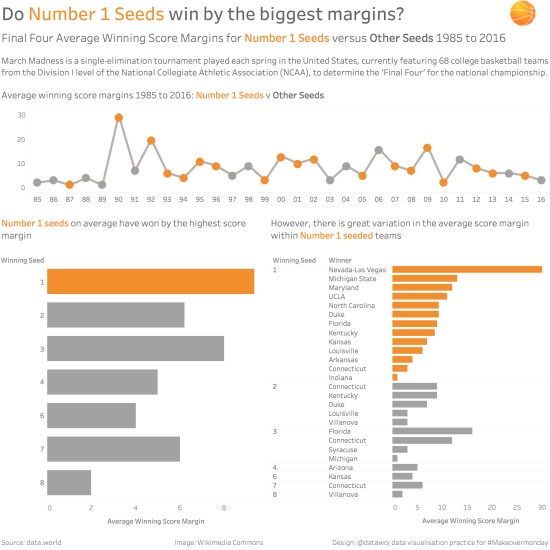 So what did I learn?